of the devastating March 2012 TORNADO

MISSION POSSIBLE (the column for the Center for Lay Ministries/Bliss House):

Her daughter lost everything – her home – her children – her relationships – her dignity – her self-respect – her ability to love - and she nearly lost her life…to drugs and alcohol.  Listening to this mother speak of her daughter’s journey into true despair engulfed me in sadness.

We were at the 12th annual Valentine Bliss to raise funds to support the Bliss House (BH) mission of guiding and transitioning women from addictions into recovery.  This was a celebration of the women who have successfully completed the program and a celebration of hope for the women who are currently in the BH program, but the grim realities this mother spoke of were heartrending and difficult to hear.

Not all BH residents are successful, but those who take the program seriously, come through with a renewed spirit and will to live.  During the many months the residents are in the BH, the residents learn everything from how to change a car tire to how to maintain their finances properly.  They learn about their addictions – why they are addicted and what they can do to kick drugs/alcohol in the butt - forever.  They learn the 12 step process of recovery and how to apply them to their daily lives.  They learn about their own spirituality and how to control their problems with means other than controlled substances or alcohol.

At the conclusion of the mother’s talk, she spoke of her daughter’s transition out of the darkness – off drugs and alcohol and back into life with the help and guidance of the BH program.  She then introduced her daughter, Brittany, and their embrace immediately transported me back to why we were at Valentine Bliss and why this was indeed a celebration.

Brittany, a beautiful and petite young woman, was clearly nervous speaking in front of 200 people about her life’s journey.   She introduced herself, thanked her mother, and then hesitated for a moment.  Brittany looked out into the crowd and seemed a bit in awe of her surroundings.  She looked radiant as she smiled, gained her composure and said, “I never thought I would be standing before a group like this, talking about my life before sobriety.”  Brittany didn’t candy-coat her life addicted to drugs and alcohol; she described the hopelessness in detail.

This graceful young woman articulated how drugs and alcohol took everything away from her; robbing her of all she cared about in life.  She explained, “I had nothing to live for since I had lost it all, even my children. I was in jail and I had no dignity or respect for myself or for others.  Then Julie Schwerer, the Bliss House Director, showed up at the jail.  She told me about the Bliss House program and all I could think of at that time was to do whatever I needed to do in order to get out of jail…so I lied to Julie.  I told her what I thought she needed to hear and within 30 days I was out of jail and in the house, with no intent to truly go through the program.”

Brittany hesitated - the details of that time in her life were obviously not easy to disclose publicly.  Brittany then said, “While I initially thought all of the residents were being fake with their cheerfulness, I soon realized I no longer understood or even recognized real happiness.”

Brittany shifted from high heeled foot to foot, and had to stop to regain her composure a few times before she spoke again, but in the audience there was no throat clearing or chair shifting during those brief moments; actually you could have heard a pin drop.  Brittany concluded, “I began working the AA steps and following the program requirements.  The structure and responsibilities were what I needed to find my happiness.  Everything else followed and today I am drug and alcohol free and I have my children, my family, and my life back.”

The entire room cheered and gave a standing ovation, a distinct indication to Brittany that respect is something anyone can earn back into their lives.  Brittany discovered the bliss in her life and with that she found the dignity and respect she lost to addiction.

If this story has touched your heart, please consider supporting this unique and worthwhile organization.  You can go to the website:  www.center4layministries.com/bliss-programs, or go by the Center for Lay Ministries to ask how you can help programs like the Bliss House to continue.  Call 812-282-0063 (Center) or 812-280-7533 (Bliss House). 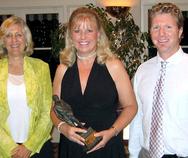 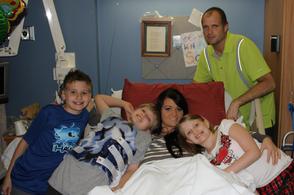 If you feed your statue and give it lots of love, you might be surprised how quicikly it will grow.

At the National Society of Newspaper Columnists’ (NSNC) annual conference in New Orleans, Carol Dawson, a local writer for The Evening News (Jeffersonville, Indiana) and New Albany Tribune (New Albany, Indiana), was presented the Will Rogers’ Humanitarian Award by James Rogers, Will Rogers’ Great Grandson.  Read articles and more about the award by selecting the link (below):  Extra Milers.

The award is presented annually by the NSNC to a columnist whose sustained work in civic journalism produces tangible benefits for the community Dawson was presented with a bronze statuette of Will Rogers, a farsighted philosopher-humorist of the 1920s and ‘30s, who used his forum as a commentator for humanitarian purposes.

Dawson originated her column to recognize individuals who “go the extra mile” and who do not seek or typically receive public credit for their deeds. Since 2002, when Dawson started writing the column, over 300 individual and groups have been featured - most from Southern Indiana and some beyond the local area. When Dawson hears of a particularly moving and/or loving story she includes that person or those individuals in her column.

In her nomination, Cindy Kanning wrote, “Carol’s columns are diverse, featuring all ages, races and ethnicities, individuals with disabilities, military troops overseas, and even animals (therapy dogs).”  She continued, “Carol writes to make a difference.”

Robert Haught, the NSNC award coordinator, described Dawson, “She has generated any number of humanitarian endeavors, but more than that, she came up with a creative idea to call attention to many citizens who are helping others in various ways.”   What Dawson does in her column is to encourage others to volunteer and make a difference.

Steve Kozarovich, Executive Editor for the News and Tribune wrote about Dawson’s columns, “Her columns are truly a compelling read that leave you with examples of the goodness that takes place in our community everyday.  By highlighting these Extra Milers, she almost certainly makes our communities a better place through inspiration and example.”

The "We Survived" series, written by Dawson was awarded the 2nd place feature series 2013 Indiana Associated Press Media Editor's Annual Editorial Excellence Award.. The series revealed the journey of survival after a catastrophic event. The Gilles Family of five were picked up, along with their home and thrown several hundred feet by the March 2 tornado (2012). Through these series of articles, Dawson states, " I've felt like family to the Gilles'...they are wonderful people and so lucky to be alive. My hope was to tell their story so that readers could see pain and recovery last well beyond the time we pay attention to the needs  after a catastrophe.  A very special thank you to Trish, Darrell, Caleb, Collin and Mia  for allowing me into their lives."

"We Survived:  A Hopeful Spirit After the Storm"  Facebook has a page devoted to these articles and the Gilles Family, including photographs:  https://www.facebook.com/WeSurvived.AHopefulSpirit?ref=ts&fref=ts
It may be necessary to cut/paste.

The articles can be viewed on-line via these newspaper links:

STARFISH STORY:    Do something to make a difference in another person’s life!

There was a wise man that used to go to the ocean to do his writing. One day he was walking along the shore. As he looked down the beach, he saw a human figure moving like a dancer. He smiled to himself to think of someone dancing on the beach. So he began to walk faster to catch up with this person. As he got closer he saw that it was a young woman and she wasn’t dancing, but instead she was reaching down to the shore, picking up something and very gently throwing it into the ocean. As he got even closer, he called out, “Good Morning, what are you doing?” The young woman paused, looked up and replied, “Throwing starfish back into the ocean.” He asked, “Why are you throwing starfish into the ocean?” She replied, “The sun is up and the tide is going out. If I don’t throw them back in, they will die.” The man was intrigued and stated, “But, young lady, don’t you realize that there are miles and miles of beach and starfish are all along it. You can’t possibly make a difference!” She listened politely. Then bent down, picked up another starfish and threw it back into the sea, past the breaking waves and said, “It made a difference for that one.” We ALL have the ability to MAKE A POSITIVE DIFFERENCE FOR OUR COMMUNITY AND OUR WORLD.

THE EXTRA MILERS® is a monthly newspaper column written about individuals from Southern Indiana (and beyond) who go the EXTRA MILE to make a positive difference. It is published in The Evening News and New Albany Tribune (now the News-Tribune).

These inspiring people do not look for recognition - they give of themselves in the purest form - they strive to make a positive difference in our community and in our world. I hope you enjoy some of the columns about these special Extra Milers. You will find my most personal Extra Miler columns featured at the top (just below the current - recently published column). 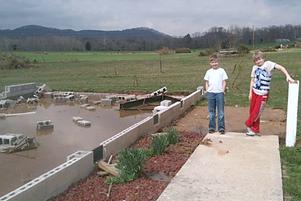 Ellen Goodman was recognized for the lifetime achievement award ~ Dawson with the Will Rogers Humanitarian Award, and James Rogers (Will Rogers' great grandson), was the presenter 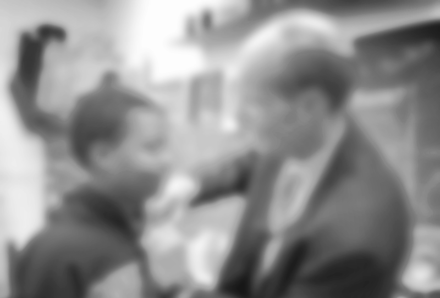 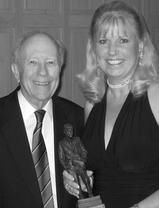 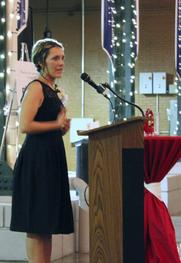 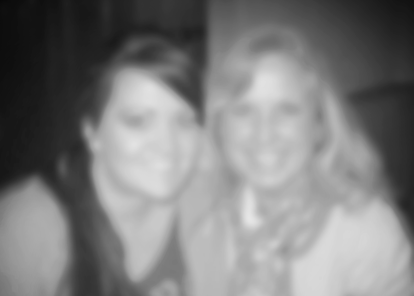 Congratulations Extra Milers and thank you for making a positive difference. 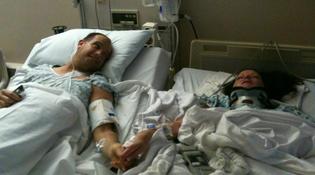 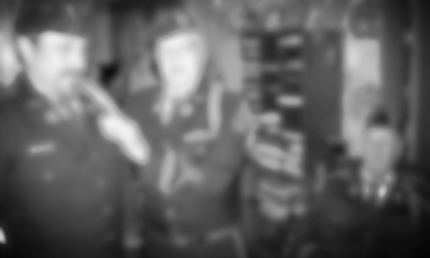