HELPING OTHERS INNATE FOR EXTRA MILERS

Barbara Purlee was born in 1923 and raised in Massachusetts; eventually moving to Jeffersonville, Indiana with her husband in 1985.  Lily was born in 2008 and Ada in 2011 – they have always lived in Jeffersonville.

Barbara is part of the Traditionalist generation.  Lily and Ada are included in Gen Z.

Barbara is 96 years old.  Lily is 10 and Ada is 8.  Change that…Ada said she was 8 ½ years old.  It is easy to forget how important those half years are to children.

Barbara was born before television, microwaves, cell phones, and bottled water, while Lily and Ada have never known life without these things.

Barbara visualizes the things she needs to do (laundry, volunteer, pay bills, etc.) for motivation to get going each day.  Lily and Ada are motivated by being outdoors, time with family, vacations, singing, riding bikes, sports, writing and more.

Barbara had a career as a nurse, as she followed her husband to the various parishes where he was a pastor.  Lily and Ada are looking forward to starting back to school after summer break.

Much of  what Barbara, Lily and Ada have experienced in life is very different, yet they are very much alike.

All three of our Extra Milers are loving, caring, and dedicated to ensuring people who are on hard times get the help they need.  All three devote time as volunteers and donors to the Center for Lay Ministries (CLM) Food Pantry in Jeffersonville.

These Extra Milers have learned the importance of giving their time and talents to help others from their parents.  They have all been extensively involved in their church throughout their lives and currently attend church together at Wall Street United Methodist in Jeffersonville.

Barbara was recommended as an Extra Miler from the past and current Directors for the CLM, Greg Henderzahs and Kara Brown.  Greg noted that Barbara was one of the most dedicated volunteers he had known, while Kara stated, “Barbara has been a valued volunteer with us for nearly 30 years and is an extremely dependable volunteer, working directly with our clients. She does an excellent job.”

Barbara began with CLM as a church representative on their board, which governs the Bliss House and the food pantry. She soon began volunteering in the food pantry.  Barbara explained, “I started working in the pantry, stocking shelves and also interviewing clients.  We could do both back then because we had so few people coming in for help.  Now, we need someone to just conduct interviews because we stay so busy.”

When asked why the food pantry is so much busier now, Barbara replied, “I think it is because the work we do has spread from word of mouth, and people who need food know where to come. They can shop in our pantry once a month, as it is intended for emergency food sustenance.  We also have our homeless population who come by once a week for a bag of groceries.”

Currently, Barbara works half a day every Friday.  She explained why she continues to volunteer.  “I am satisfied and comfortable in my life and when I see others who are struggling to put food on the table for their families, I don’t know how they do it, so I try to do what I can to make their lives a bit better.”

Lily and Ada Morrill came to my attention when they advertised their lemonade stand to raise money for the CLM food pantry.  I was intrigued by the enthusiasm of these two young philanthropists.

Lily and Ada, with help and guidance of their parents, Bethany and Tim Morrill, have been selling lemonade (and cookies) in their neighborhood for three years and donating the proceeds to charity. Their efforts this summer resulted in a whopping $242.47, which resulted in 215.5 pounds of food donated to the CLM, with the remaining cash given as a donation. In the past they have donated to the Haven House, purchasing school supplies for the children who reside there.

Occasionally they also help the CLM food pantry by working in the back-stock room.  When asked why they volunteer, Lily responded, “When you think about what you have, for instance a nice bed, family who love and care for you, three meals a day…then I know others may not have these things, I have to help.”

Ada replied, “I see homeless people and they don’t have basic things like a bed or food; it makes me sad.  We keep homeless bags in our car with food, water and other things that we hand out.”  Bethany added, “When Ada was just three years old, she was upset to learn that some people don’t have clean water.  She wanted to do something for the “Clean Water Initiative,” so she made over 100 bookmarkers, sold them, and donated the proceeds.”

Lily writes a newsletter for her neighborhood she has entitled, “The Morrill News.”  She includes news of the neighborhood, new neighbors, new houses being built, etc., along with her family news, famous quotes, and an editorial.  Ada grinned and added, “She even interviewed Lucy, my American Girl doll!”

When asked to describe herself in one or two words, Barbara thoughtfully replied, “Caring and energetic.”  Lily described herself as an optimist, “I love to be around other people.”  Ada thought for a moment and then said, “I would say I’m energetic and usually happy, a dog lover, content with what I have, kind, and…ummmm, I’m usually hungry.”

When asked if Barbara had a favorite verse or quote, she didn’t hesitate to reply, “Yes, it is, I can do all things through Christ who strengthens me.”  Lily stated she likes the Bible verse John 3:16, while Ada likes a quote from a wall hanging in her home, “Courage does not always roar, but sometimes it is the quiet voice at the end of the day that says, I will try again tomorrow.”

Barbara, Lily and Ada do not see their efforts as anything special…there is simply something innate within their personalities that compels them to be philanthropists.  All three have charitable hearts that beat for humanity; they are servant leaders, showing us that you can’t be too old or too young to make a positive difference in our Southern Indiana community.


KINDNESS TIPS FOR YOU FROM OUR EXTRA MILERS:

Barbara:  Really think of others and not just yourself – there are so many things you can do. You can be a reader or go to the grocery store for someone who can’t drive. Don’t let age be an excuse.

Lily / Ada:  No matter your age, get out and volunteer; you will be helping others and it is also fun!

Carol A. Dawson is a resident of Jeffersonville and owner of EEO GUIDANCE, Inc.  If you have seen or been a part of an act of kindness or know an EXTRA MILER, please let her know about it.  To submit a story or act of kindness, contact Carol via email:  Cdawson@eeoguidance.com or mail: THE EXTRA MILERS, 212 Pearl Street, Jeffersonville, IN  47130. 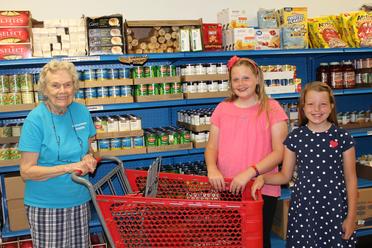